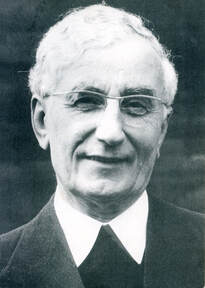 Rev. Bernhard Bendel
Fr. Bernhard Bendel founded the Opus Spiritus Sancti communities, although he always insisted that the “founder” of the Opus Spiritus Sancti was the Holy Spirit.  He was a priest of the Diocese of Limburg, Germany. Fr. Bendel was born in the village of Steinefrenz in the Westerwald on October 20, 1908. He was the oldest of eleven children.  His parents were Heinrich-Georg and his mother was Katharina Michel. The young boy, Bernhard, attended primary school in Steinefrenz through the eighth grade. He was taught Latin by the local parish priest and was able to enter the Bishop’s minor seminary in Hadamar when he was fourteen.
​
Later he went on to St. Georgen in Frankfurt where he studied philosophy and theology.  He was ordained on December 8, 1933, and celebrated his first Mass at his home parish church in Steinefrenz two days later.  After serving in a variety of ministries in the Diocese of Limburg he was assigned pastor of St. Michael’s Parish in Mammolshain where he worked, first as the parish priest and later as Rector of the Opus Spiritus Sancti communities until his death.  He served as Founder and as Rector of the OSS from 1950 until his death on January 19, 1980.
Copyright Opus Spiritus Sancti. All Rights Reserved.